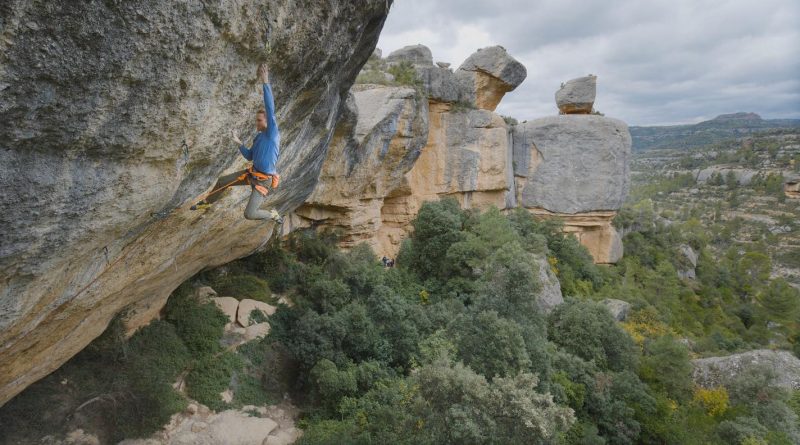 That was long overdue; Jakob Schubert gets his first ascent of a 9b+ route with the third ascent of ‘Perfecto Mundo’. He is only the fifth climber, after Adam Ondra, Chris Sharma, Alex Megos and Stefano Ghisolfi. On the same day he also got climb ‘Gancho Perfecto’ (9a/9a+). Chris Sharma bolted the route in 2010, but couldn’t climb it. So Alex Megos and Stefano Ghislofi tried their luck in the route. Both then managed to route last year, Alex in June, Stefano in December. “Perfecto Mundo” is the only 9b+ route not climb by Adam Ondra. Currently there are only four routes in total (Change 2012, La Dura Dura 2012, Vasil Vasil 2013 and Perfecto Mundo 2018) in this grade.

“What a day, after failing four times after the crux, two days ago even on the very last hard move above the lip it was an incredible relief to clip the chains of this amazing line today! 3rd ascent after my buddies @alexandermegos and @steghiso. At the beginning of this year I already had the goal to try sending this route this fall but to do so I told myself I got to qualify for the Olympics already at the WCH in Tokyo. After fulfilling this goal in the summer I rewarded myself to skip the last few Worldcups and focus on Perfecto Mundo instead and it all payed off. The cherry on top was a quick ascent of Gancho Perfecto [9a/9a+] to end an already perfect day! Thanks a lot to all the great people supporting me at the crag and of course special thanks to my brothers @domen_skofic, @alfons_dornauer and my girlfriend @pumkin_honey.” (It‘s all on film as well!)