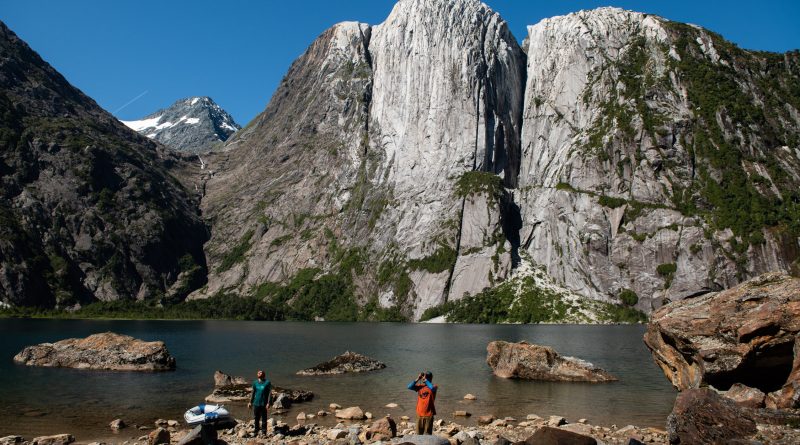 “Last month it happened, a group of friends which had met last year in El Chaltén (Patagonia) got ambitious, we became a team and were ready to explore some new granite walls. A ‘Chilenean’ climbing and exploration trip in Northern Patagonia. 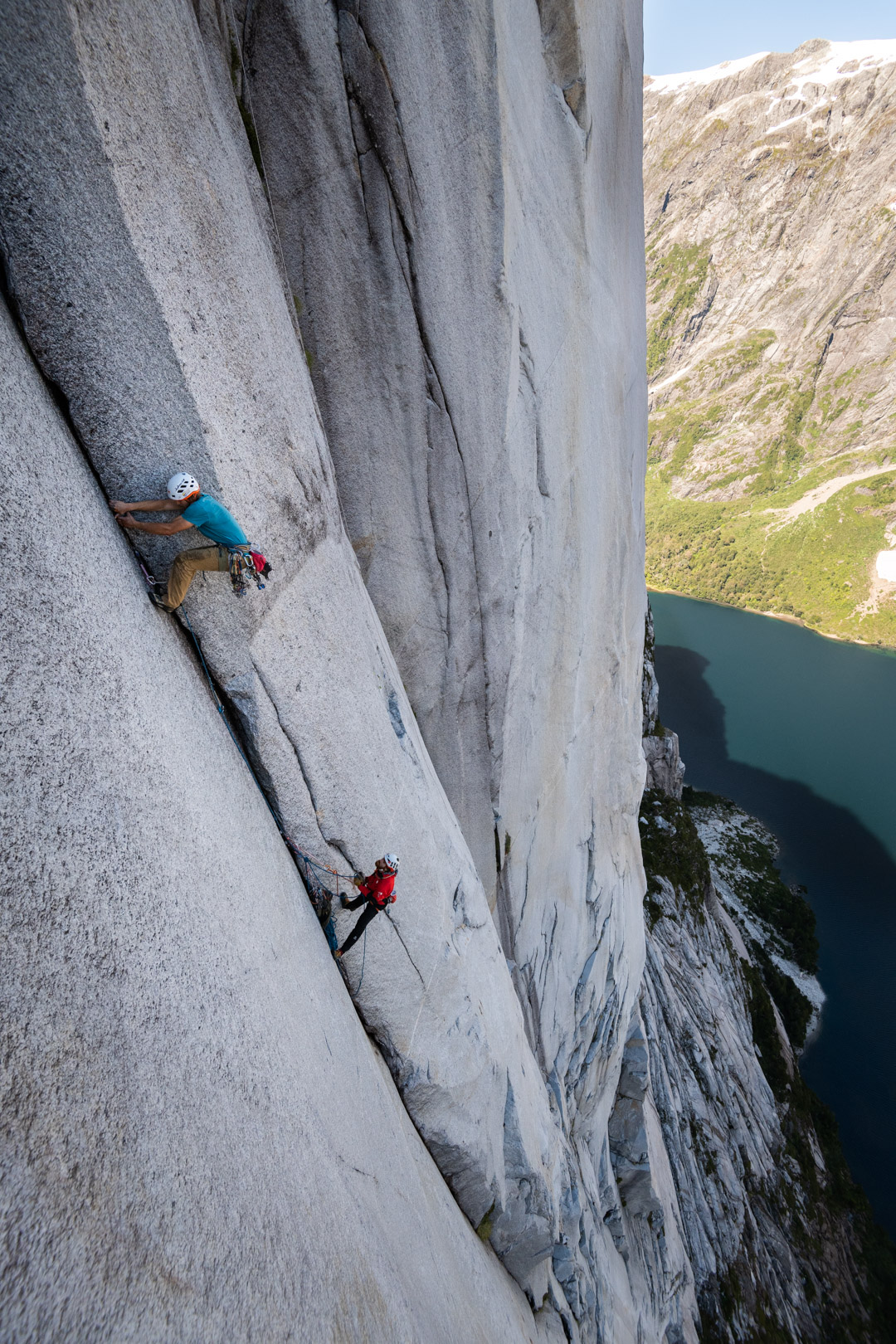 “Bailando con la Lluvia” is the first ascent and result of this challenging climbing expedition in ‘Valle de la Plata’ near Chaíten in the Palena Province in Chile. Together with Max Didier (CL), Austin Siadak (USA) and Ian Siadak (USA) we were committed for the month of February 2020 to spent time in jungle and on granite. Originally, Max had scouted out some unknown walls on Google Earth in a valley called ‘Valle Alerce’. We got motivated and prepared for the full big wall adventure, cause that’s what we were searching for; an unclimbed big wall to climb and spent some time among friends in the portaledges. Before fully committing we made one scouting day. Alerce Valley was wild and had lots of rock. But it didn’t awaken the big wall vibes in us, too much jungle and maybe just not vertical enough. A little disappointed but with a plan B in the back of our minds we decided to return to civilization and consider our options.

Near the Alerce valley lays another valley called ‘Valle de la Plata’ which leads up to a big wall called ‘Serania Avalancha’. This wall had previously been climbed by Mariana Gallego, Martin Molina and Luis Molina in 2007 and by Silvia Vidal in 2012. Despite their ascents we couldn’t find much information about the approach, the wall and the area. We decided to commit to the Valle de la Plata and have a look at this mythical wall ‘Serrania Avalancha’.

Reading Silvia’s reports, we knew the approach was only 8 kilometers. Short but difficult because of the pure jungle and wild river hiking. This information became rapidly confirmed. After only 1hour we bumped into dense jungle and a steep river with lots of waterfalls, impossible to walk in the riverbed. From that first day, 5 more challenging days followed. Days swinging our Bear Grylls machetes, crawling on hands and knees, wading through the sometimes deep river with often strong currents. The objective of climbing in that 7-day long weather window vanished as we conquered more bamboo and river crossings. Just getting to Laguna de la Plata, a huge lake at the base of the wall, already seemed like a great aim.

Six days into our trip we reached the laguna. To our surprise we didn’t only find the famous Serrania Avalancha rising out of the lake. Opposite of Serrania we found this beautiful white wall full of obvious crack systems. Not only this wall looked more appealing, it also looked drier and less likely to turn into plenty of raging waterfalls when the rain would start. Because bad weather was predicted and a lack of time due to the long approach we decided to go for the smaller but very appealing ‘opposite’ wall.

In three climbing days over the period of our first 8 days camping below the wall, we managed to reach the summit using fixed ropes to make progress and return to basecamp. The unnamed peak and wall we baptized “Pared de la Plata”. This first ascent we called “Bailando con la Lluvia” (Dancing with the rain). This name refers to the difficulty we experienced these days climbing in between the rain curtains that turned the walls into raging waterfalls. We sneaked into every little peephole to reach that summit on a very grey and unstable day. On that summit day, threatening clouds and small showers where upon us. While descending we decided to leave static ropes fixed to return to pitch 8, the top of an amazing pillar jammed into a big dihedral. On the first ascent, the obvious itinerary of pitches 10 to 12 didn’t go free because of the wetness, mud and moss in the cracks. Descending we spotted a cleaner variation to the left of those pitches, this motivated us to come back and try to make it an all free ascent. One day of rain and waterfalls later a real weather window of 5 days showed up. This was our chance, this is where we came for. We packed our well-prepared big wall kit and moved camp up on the wall, to the top of what we called “Puerto Pillar”.

The next one and a half day we freeclimbed the variation. Just one hand-drilled bolt was necessary to traverse out left into another corner system at pitch 10. This was the beautiful freeclimbing we were looking for. “Bailando con la Lluvia” has an original aid version (7a / A2, 16 pitches, 700m) and a free variation to the left (7a, 16pitches, 700m). This first ascent has been climbed team-free over several days. This first ascent has been climbed team-free over several days. Pared de la Plata has first been attempted in 2014 by Tola Señoret, Juan Señoret, Mike Sanchez and Sebastian Schmidt but the wall remained unclimbed. They climbed fourteen pitches, retreating just shy of the end of the difficulties. “Bailando con la Lluvia” shares parts of two pitches with the attempt in 2014.

The two nights on the wall where for sure the highpoint of the trip, the contrast between the heavy rainy days and stable weather made us savor this wild place even more! Unfortunately, we couldn’t enjoy the weather any longer. Because the hike out of the valley would be impossible with rain and rising rivers, we had to take advantage of the last two good days and start to hike out, straight after our descent to basecamp. In two days, knowing the river crossings, the jungle path and every single trick, we managed to bring all our loads back down to the Rio Avalancha and cross this one by foot to our starting point.

This was a very committing expedition I am happy to have shared with friends among which I feel at ease and secure. Key ingredients for becoming a solid team to reach solid objectives, which we did. Thank you, Max, Austin and Ian, for all the good vibes, communication and motivation.

Many thanks to all the locals in Chaíten and Puerto Cárdenas for helping us with logistics. Big thanks to local gaucho Pierre Angelo who helped us cross Rio Avalancha by horse on our first day. Thanks to Rolo Garibotti for the accurate weather report, crucial for that threatening summit day! 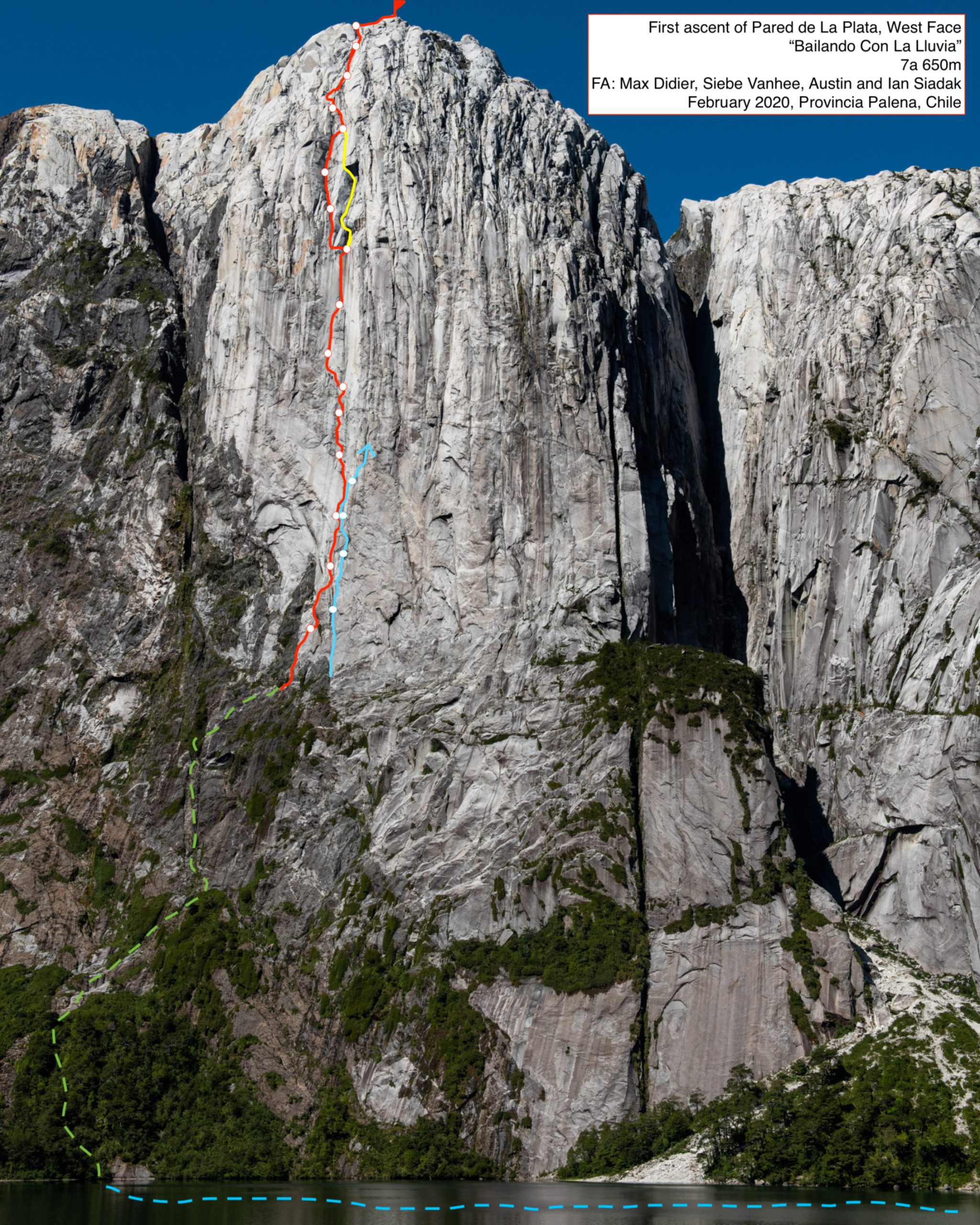