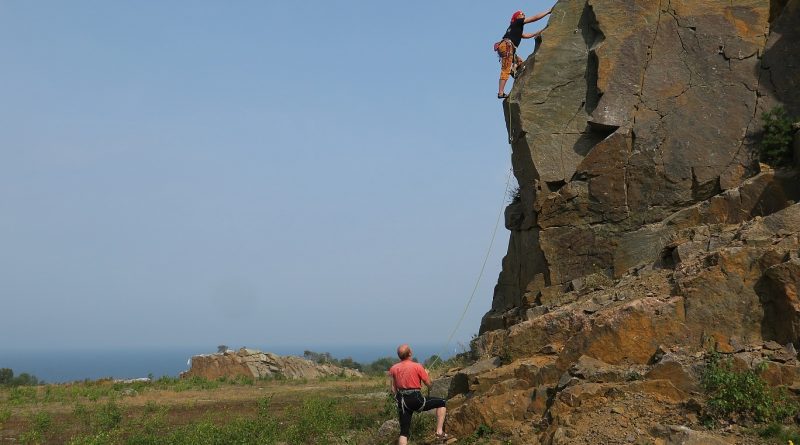 It’s also nice to write about your own activities ;-). So the “Kletterblock” team goes to Bornholm in Denmark for rock climbing :-). The Denmark-owned island in the Baltic Sea now offers 900! Routes and Boulder. However, not only the meanwhile big number of climbing routes, but also the obligation offered by the stricter rules, to put on the cliffs no bolts for climbing. This gives Bornholm a lot of sophisticated Trad routes. As contrast, there are larger quarries, such as Moseløkken Stenbrud and Vang Bruddet where very good sport climbing routes. Our certainly most significant coup succeeded in Alma’s favorite crag “Jons Kapel”. There he first ascented three new routes at “Kangaroo Point” a few years ago. He noticed the walls north of “Kangaroo Point”. Now back, with “Jons long march” (5+) we were able to open the probably longest route on Bornholm (and thus Denmark ;-)). The route is over seventy meters long and located on the northern ridge of the new Jons Teater sector. The southern ridge was also reopened as “Far Albrecht Sojler”. Jons Teater and also the walls in the sector between “Far Albrecht Sojler” and the “Kangaroo Point” offers many new and partly extreme Trad routes as well as Boulder.

Our new routes as well as the missing routes will be published in the second edition of the Bornholm climing guide, which will be released before Christmas. Many thanks to the climbing guide author Karsten Kurz, who we met surprised on site and he provided us some tips.