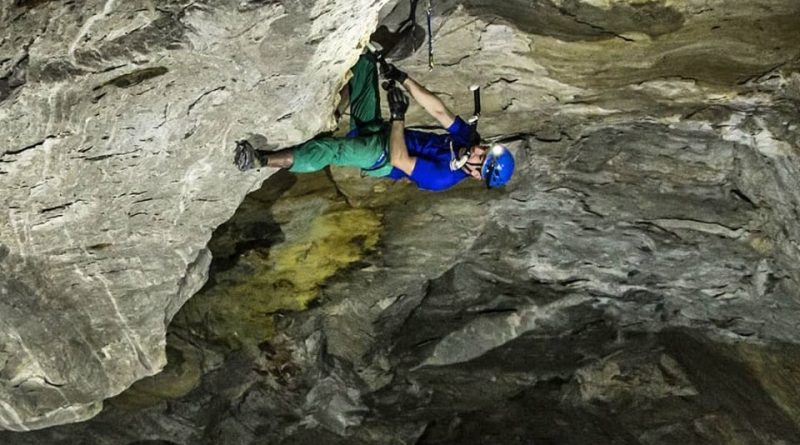 Filip Babicz sends one of the world’s hardest dry-tooling lines with “Ade Integrale” (D15 +) in the “Gran Borna” cave near La Thuile in the Aosta Valley in Italy. The 70 meter long route starts from in the very bottom of the cave with 104 moves directly through the strongly overhanging part of the wall. Filip only needed 46 minutes for the complete ascent. The difficulty of Filip is not out of thin air, as Filip could climb other etrem difficult drytooling routes. Whether the route is now the hardest drytooling route in the world remains open until it is repeated. Currently his own route “Oświecenie”, “Storm Giant” and “Parallel World” are the hardest drytooling routes in the world.

“26th November an idea has become a reality. The idea which had been born in my mind 4 years earlier have finally been forged into reality. Even though there has been a week since the ascent, it has just struck me how much this means to me. Ade is the very route I’ve been dreaming for the past four years, it’s the very reason that two years ago, on Nov 29th 2017, I’ve involved myself into drytooling. At the beginning, it would seem absolutely futuristic to pass through this huge underground roof of Gran Borna cave, yet the consequence and the sterling belief in conjunction with my stubbornness have finally leaded me to realisation of The Great Project. . Initial step was to send the first pitch, 40 m long “Ade”, which I’ve sent last year. Afterwards, the next step was to execute all the moves on whole the 70m long route. From that moment I’ve become to realize that to send the entire route claims the certain period of full immersion into the goal, in the underground depths of La Thuile. It took me subsequent year to find an opportunity to test my stamina. My friend @przewodnikliteracki has decided to help me accomplish the task. After a month of a dedicated training the time has come to fully immerse into Ade. For two weeks we have been working our fingers to the bones, spending up to 10 hours in row in the cave. The labour has turned to be fruitful, though. . Finally on Nov 26th, the day of implementation has come. It took me 46 minutes of continued climbing to send “Ade Integrale” – the route which starts in the very bottom of the cave, leads through the roof and ends with the descent in the deepest point of the cave. The whole route consists on 104 holds (165 moves), all of them natural, which makes the route unique in the world of the extreme drytooling. It is undoubtedly the longest and one of the hardest routes I have ever sent. Taking under consideration the grade bid (D15+), this could be the hardest drytool line in the world, consisting on fully natural holds.”