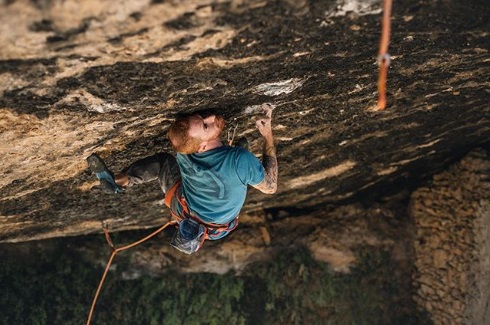 After his compatriot Stefano Carnati end of last year, Gabri Moroni managed a ascent from ‘Demencia Senil’ (9a+) in Margalef in Spain. The route was first started by Chris Sharma in 2009 and was the hardest route in Margalef at the time. For Gabri, who no longer really believed in an ascent,  was the 7th ascent of the route. “Catalunya, especially Siurana and Margalef, have always been my “winter holidays” choice for more than a decade… During the first five or so years, I repeated a good number of hard routes till 9a but never really tried anything at my limit. I remember staring at Demencia Senil from below countless times knowing it might suit my style but something stopped me from trying it until December 2014… That day, I wouldn’t have ever thought I had just started such a biblical process with a lot of trips, amazing days but also some shitty ones, trashed skin, blood and countless meters of tape… But at the end it was all worth it and I have never stopped believing!…”