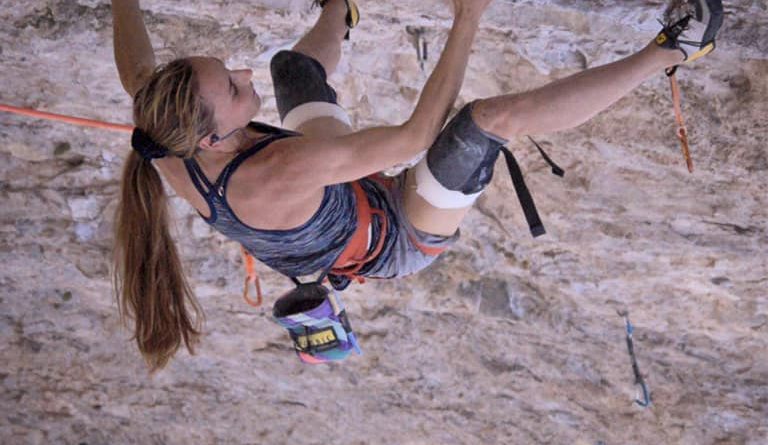 Alizée Dufraisse is currently staying in the „Ali Baba“ cave in Rodellar and was able to climb the „Hulk extension“ 8c route despite high temperatures around 30 ° C. For the extension „Hulk extension total“, which Pjotr ​​Schab first ascented in 2018, there was no longer enough time. But Alizée is determined to come back.

It was Dani Andrada who found the Ali Baba cave in Rodellar in 2005 and began climbing in it, setting up numerous boulders and routes, including „Hulk extension“. In 2007 he combined many of them to the route „Ali Hulk Extension total (Sit Start)“ 9b.

At the time, Andrada had built a portable cart and his spotters could move his wheeled crash pads around in the cave. Later, the „local cleaning team“ set the car on fire when they thought climbers would use it to sleep. Another extreme combination was created by Jonatan Flor in 2019, which Laura Rogora climbed this year.

„I decided to climb on different things for a week in order to change my mind a little, and now I feel super sycked to try the project again  Trying the same route for a long period of time can be hard, especially when you feel close to do it and you still fail…  I could try hard in the Ali baba cave despite the heat that is still present (everyday around 30 degrees). I could manage the ascent of „Hulk extension“ 8c and find out the moves of the extension total 8c+ for later  I decided now to try to balance between the extension total and autoengano, this way I ll maybe feel less stressed by trying only a route and use the mixing styles to keep improving“