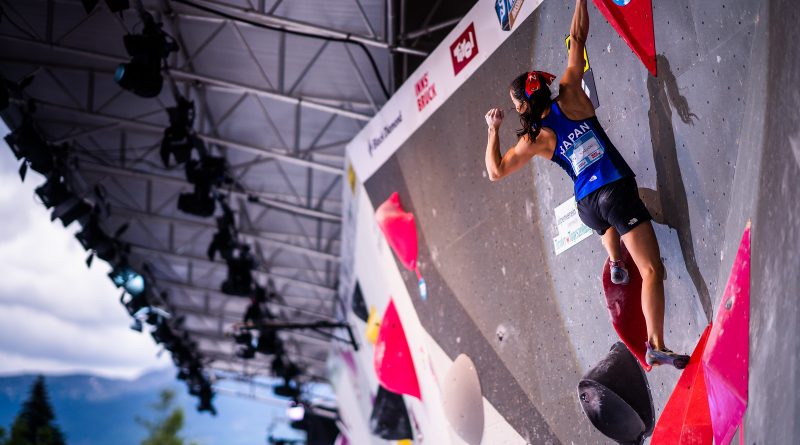 A heavy thunderstorm may have disrupted this evening’s Boulder finals in Innsbruck, Austria, but it certainly didn’t dampen the spirits of the athletes and their supporting teammates. Slovenian Janja Garnbret claimed her second World Cup win of the week in the women’s event and in the men’s, team Japan occupied all three podium positions.

Following bloc three, the women’s final was called off due to heavy rain and thus, results were calculated based on three boulders as opposed to four. Janja Garnbret of Slovenia flashed all three blocs, flying into first position and earning her second gold medal of the World Cup in Innsbruck, having also achieved first place in last night’s Lead final. Close behind Garnbret was the USA’s Natalia Grossman, who also secured a top on all three boulder problems and earned her fourth Boulder World Cup medal of the 2021 season, out of four Boulder world cups so far this season! Completing the women’s podium was Serbia’s Stasa Gejo, who took home medals in Boulder and Combined at the IFSC European Championships Moscow 2020.

In fourth place was Japan’s Futaba Ito, with her compatriot Akiyo Noguchi following in fifth for the final World Cup of her stunning Sport Climbing career. Aged 32, Noguchi has competed in an incredible 169 world cups and World Championships, standing atop the podium a sensational 75 times since her first international competition in 2005. The Olympian’s closing competition will be the Olympic Games Tokyo 2020 this summer – a fitting send-off following an extraordinary career.

Due to injury Miho Nonaka, also of Japan, was unable to compete in this evening’s Boulder final.

In the men’s event, which took place slightly later than scheduled due to the storm, Japan’s Yoshiyuki Ogata, Tomoa Narasaki, and Kokoro Fujii climbed their way onto the podium. Topping two out of three boulders, Ogata secured first place and earned his second gold World Cup medal. His teammates Narasaki and Fujii placed second and third, respectively, having each topped one boulder. Austria’s Nicolai Uznik achieved fourth place on home soil, besting Belgium’s Simon Lorenzi in fifth and the USA’s Nathaniel Coleman, who placed sixth in the men’s event.

Full results from the women’s Boulder World Cup can be seen here, and the men’s here.

The women’s podium is as follows:

The men’s podium is as follows: