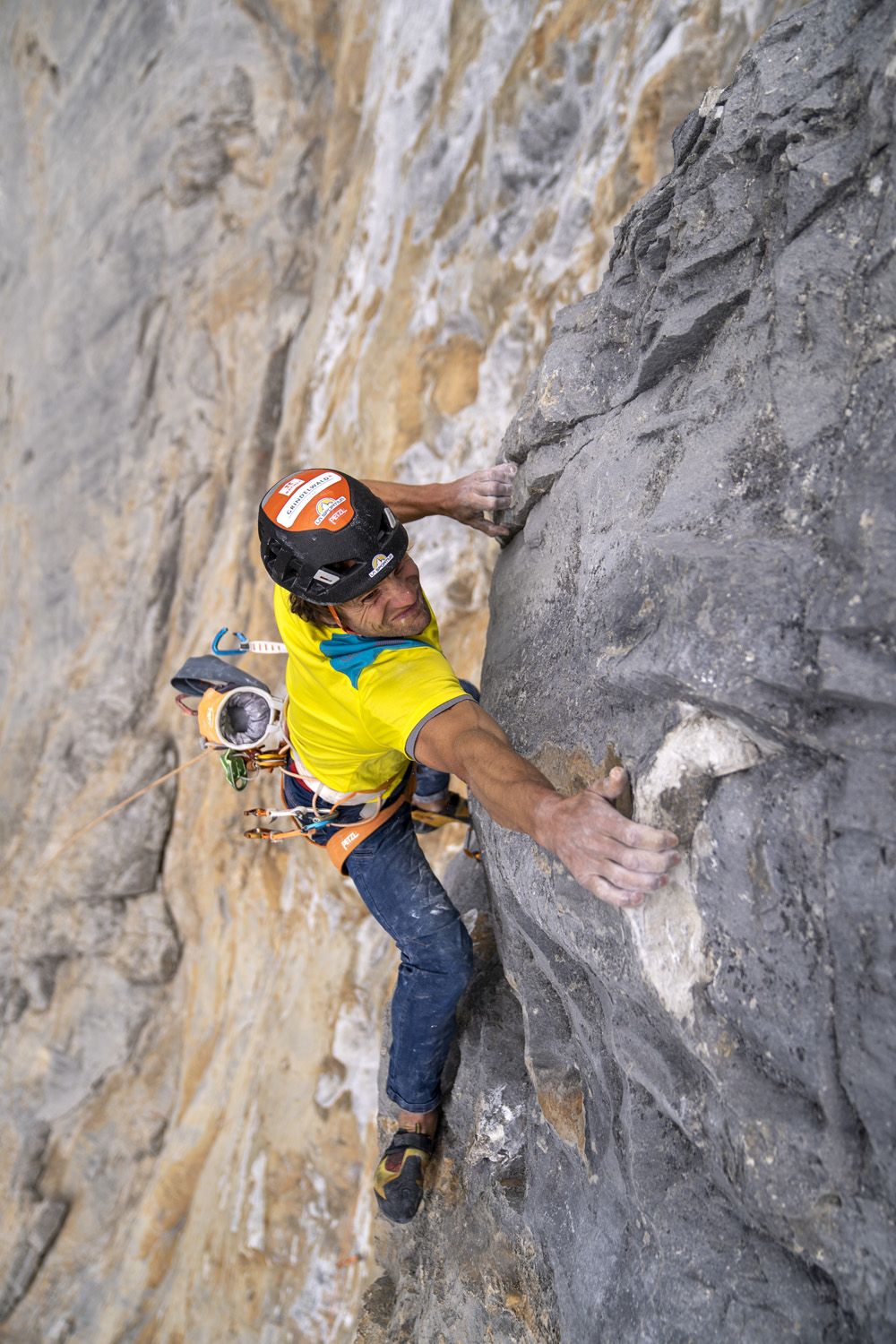 On July 23, the Swiss Roger Schäli, together with the Belgian Sean Villanueva, managed another historic act in the Eiger North Face. They managed the first one-day redpoint ascent of the multi-pitch route La Vida es Silbar (8a). The tour was established in 1999 by Daniel Anker and Stephan Siegrist. In 2003, the first redpoint ascent followed by Stephan Siegrist and Ueli Steck. In 2016, Roger Schäli, together with New Zealander Mayan Smith-Gobat, booked the second redpoint ascent on the route. They needed three days to do so. Here’s his report: 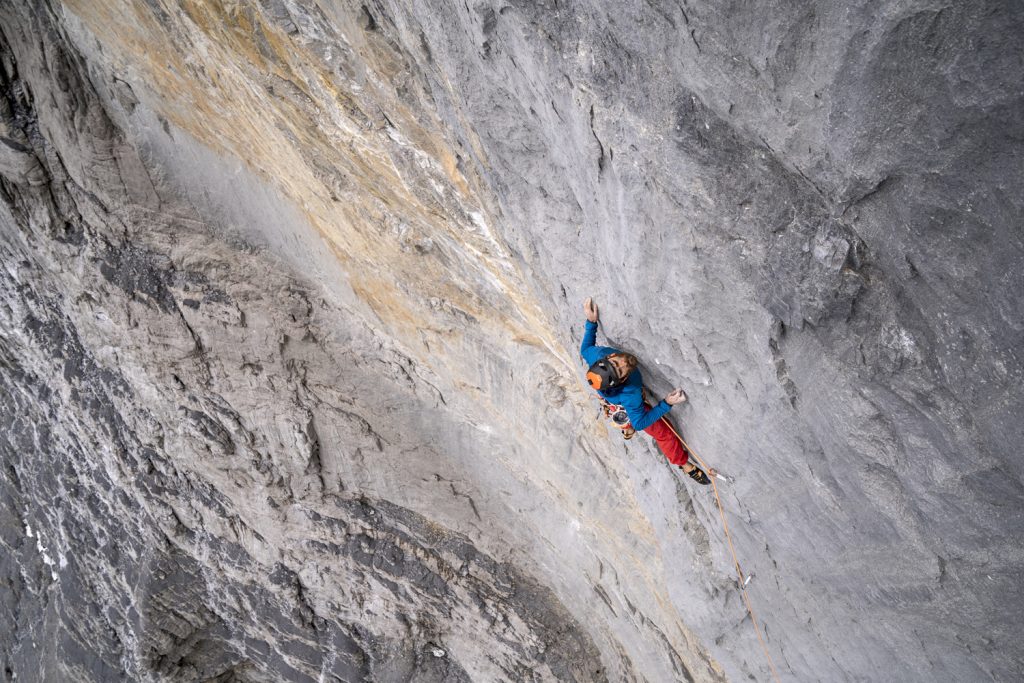 He’s standing on top of the Czech Pillar on the Eiger. Sean’s arms are stretched to the sky, strong and powerful, his eyes glowing with satisfaction. It was this moment that I had been dreaming of the past three summers. The first one-day redpoint ascent of “La Vida es Silbar”. A long story connects me with this route.

Simon Anthamatten and I first climbed this huge route in the summer of 2003. Simon and I spent almost all summer in the neighboring “Japanese Direttissima” with the goal of scoring the first free ascent. We freed all but one pitch. During this time Stephan Siegrist and Ueli Steck were working on the first free ascent of “La Vida es Silbar” which they successfully completed within two days.

Simon and I set up our bivvy for the first time in the cave-like niche named Hotel Rote Fluh by the first ascensionists Daniel Anker and Stephan Siegrist. On our second day we were stopped in our tracks by a heavy thunderstorm that caught us in the belay of the 22nd pitch of 26 in total. Our emergency bivvy became uncomfortable fast. We spent the stormy night hanging in our harnesses rather than lying down, not eating or drinking the entire time. The next morning the remaining four pitches were horribly icy from the hail and icy rain and we risked a lot to climb out of the wall with its long runouts. When I finally got back to the Kleine Scheidegg I turned on my cell phone to find 12 calls from my friend Stephan Siegrist who was worried about us all night. Not without a reason!

“La Vida es Silbar” didn’t receive many visits and repeats in the following years. Despite some strong rope teams attempting the climb none was able to redpoint it. I was able to redpoint it in 2016 within three days thanks to the massive support of Mayan Smith Gobat. I was really excited about this success.

Mayan and I had been dreaming about a one-day redpoint back then. We both knew it would be absolutely amazing to accomplish this feat. In the beginning it was just the thought of how awesome it would be to actually redpoint it in a day. Then the magic of having a vision takes on form. In the beginning it’s just a dream and seems impossible. Then after a while the quiet sets in and you realize it could be possible if you try hard enough. I love the moment when a seed is planted and receives the necessary input to grow. 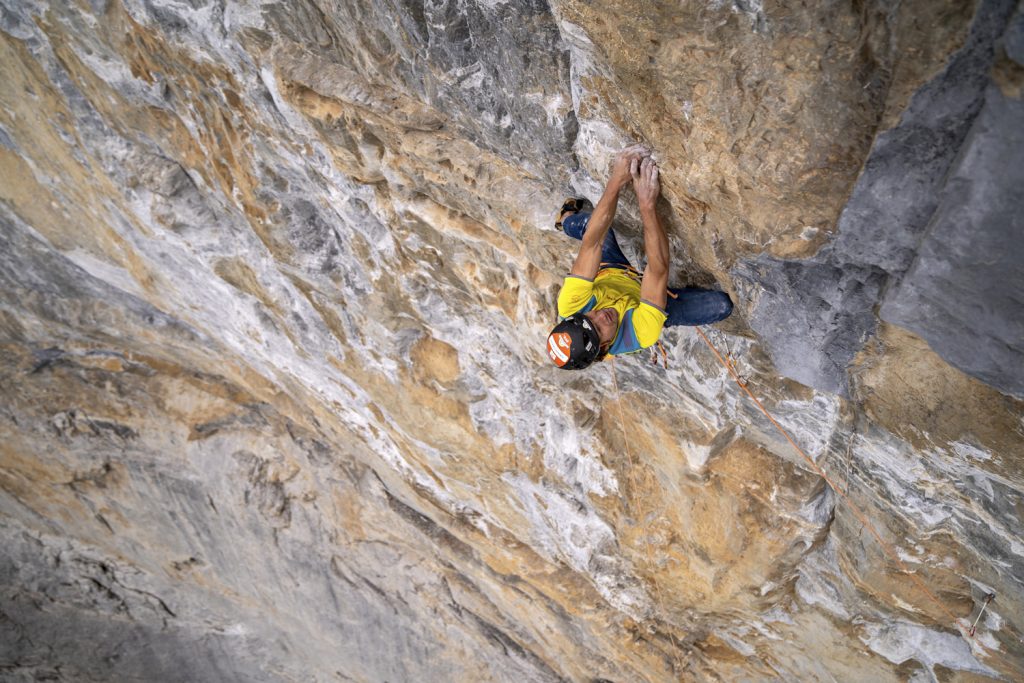 My dream and the fascination with the route grew so big that I tried a one-day redpoint in the summer of 2017 with Tobias Sutter. Unfortunately, Tobi and I didn’t have much luck with the weather during the days we had time. In addition, Tobi slipped during a bad weather day and fell into the rope. His fall and the suboptimal weather took the wind out of our wings and we aborted our mission. The hardest pitches had already been behind us. It was really tough on us, but we hoped for a good weather window. It didn’t come that summer.

I tried again in the summer of 2018 with Frédy Abächerli. We were in our sleeping bags early and I had a good feeling. I fell asleep feeling confident that tomorrow would be a big day. I had all the moves memorized in my head. But then I was woken up by rain dripping on me. I thought I was crazy! We spent the last days assessing the most stable day of the really stable weather window. We checked the weather report a hundred times and contacted numerous weather services. They were all sure that this would be the best day! Well it turned out different than we had hoped for. A cloud had rained itself out in the north face of the Eiger and everything was much too wet in the first rays of light to have even the slightest chance of a one-day ascent.

So this summer turned into the third summer I spent my energy on “La Vida”. On July 18th my friend Lucien Caviezel was my belay partner in the first hard pitches on the route. Gosh it felt so exhausting again! I also discovered that parts of the sixth pitch had broken out, making it harder. The summer before I already realized in horror that a large rock fall had destroyed a bolt on a hanging belay in pitch 6 completely and taken out a second one partially.

Tobias Sutter and I built a new belay at the beginning of the next pitch at a no-hand-rest. Perfect! The next pitch was reduced by about five meters. This made the next pitch that traversed horizontally only about 15 meters long. It ended at another hanging belay. It became a logical goal for me to climb those very steep 30 meters to the Hotel Rote Fluh in one stretch.

July 23rd was supposed to be a stable weather day. Without a doubt. I was able to easily motivate Sean Villanueva to use this chance to climb with me. It was the perfect practice for us since Sean, myself, and Mathieu Maynadier will be going on an expedition this year in September to the Himalayas.

Once again I lay down in the Czech Bivvy. I’ve surely spent at least 30 days here climbing the “Japanese Direttissima” , our “Odyssee”, “Paciencia” and “La Vida es Silbar”. Will tomorrow be the big day? Unfortunately, I couldn’t sleep well since my left shoulder was acting up again and I was in pain despite taking some pain killers. I started boiling water with Sean in the dark. We had cappuccino and Sean’s signature Nettle Curry from Lyo Food. I didn’t feel well and I started the day nervous thinking about how this could be the only day of the year when this redpoint could be possible. Also my shoulder kept me up all night. But that’s just how it is and I just had to give my best.

We climbed the first pitch in the dark. The first 7a pitch brought the first daylight. I asked Sean if I could climb all first and hard pitches first since I can focus better on the sharp end. I was able to redpoint pitch after pitch but I had to try extra hard! Sean followed my lead really relaxed and in perfect form. I tried to give him my beta as much as possible and cheer him on. He was able to climb the crux on the tenth pitch just barely with my screaming beta arriving down below just in time. It was amazing! Both of us managed to climb the physically hardest part! If we continued like this we could score a team redpoint in a day! We were totally motivated and I was really more happy about Sean’s climbing performance than my own.

Pitch 12 is relatively easy at 6b+ but it’s quite adventurous with loose rock and little protection. Perfect climbing for Sean. He climbed the pitch in a flow, fast and confident. Then the horrible second in which a foothold broke loose. If Sean hadn’t been able to catch himself by his hands our day would have ended with him lying 20 meters below on a gravel ledge. 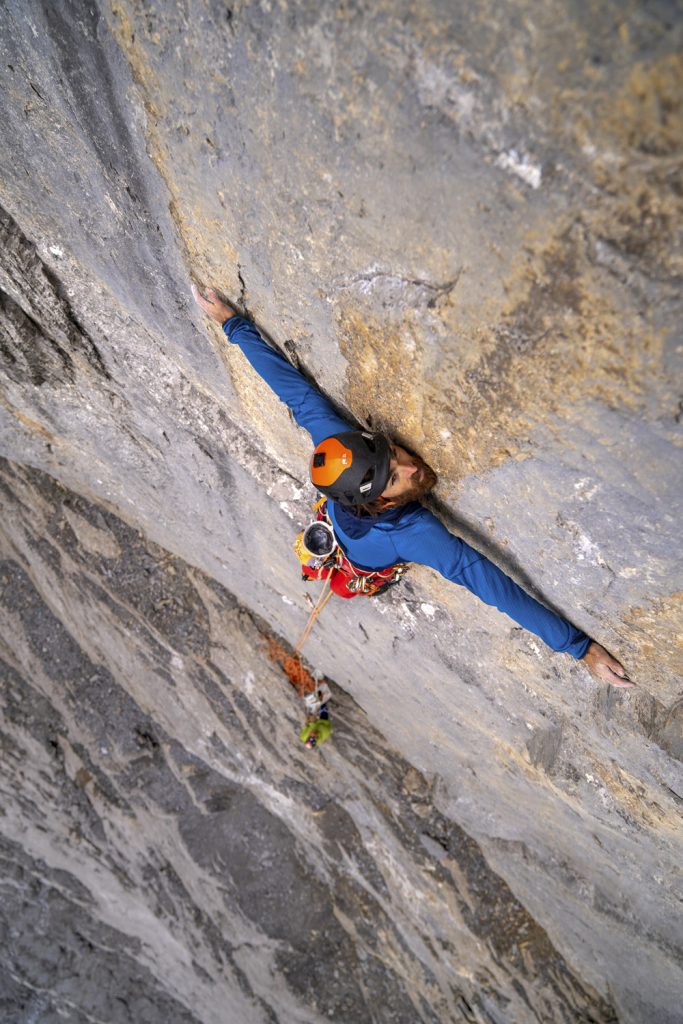 We made progress again fast but we slowly noticed fatigue in our arms and legs. Four hard pitches awaited us above the Czech bivvy that we had just reached. Sean took over the sharp end in the remaining four pitches. That way we could each rest at least a bit in between pitches. Sean climbed well through the last hard pitch, a 7b slab. His moves were relaxed and flowed.

I began climbing and my head started to tell me that this could be the last barrier to the one-day redpoint. It’s just this next pitch and I would have done it! What if I just couldn’t keep my cool? I climbed inhibited and tense, the beginning is hard and you have to have good feet. I slipped and fell into my rope. The pressure mounted as Sean lowered me again. The odds seemed to be against me. I had already redpointed this pitch with Mayan but now my head was spinning as I built up all these expectations. I knew I had to climb this pitch to make my dream a reality. I knew it would be harder if I fell a second time. The more you think you have to send the harder it gets. The crux is to get back into the flow. I climbed higher but stalled again. I couldn’t seem to reach a slopy hold. I wanted to dyno up to the lower of two holds as I heard Sean yell: “No Roger, the lower one is too bad!” So I went back, switched footholds, and went all in. I pushed onward and upward towards the higher, better hold. Sean screamed: “Woah dude that’s crazy!” It felt crazy but it worked. I was back in the flow! I finished climbing the pitch!

The last seven pitches are easier but mentally demanding since our fingers, toes, and arms just hurt. It was quite a fight to keep concentration high. We passed the belay in pitch 22 where I had to make the emergency bivvy with Simon Anthamatten. It was such a suffer fest back then and it takes years to actually see this as fun in retrospect.

Our adventure wasn’t over yet. We rappelled via the south face. I knew that Resu Leibungut had left a sleeping bag and mat there after his first ascent of the Märmelibahn. Sean and I were so happy to know that we would be able to lie down in a bivvy in the middle of the south face at 2am and not have to freeze. But we found two sleeping rope teams there with the stable weather window and we didn’t want to wake them. I also didn’t want to take “my sleeping bag” away from them. So a short and cold night stood before us. But the night sure did feel long with my shoulder that began hurting again despite several pain killers. Sean played the flute he had with him the next morning and all pain was forgotten. What remained was the memory of my best climbing day to date on the Eiger with the best rope partner ever! And I do have some pretty good reference points with my first two one-day ascents of “Magic Mushroom” with Raphael Vogel and the  “Ghilini-Piola Direttissima” with Robert Jasper!

It’s a good thing that the flute made it all the way with us. Our bag with credit card, mountain guide ID, and Sean’s cell phone wasn’t as lucky. We carefully rappelled down the remaining 400 meters in the south face. A huge dream became reality. Thank you, Sean, and thank you to all those that have supported me with patience, motivation, and understanding on this long path.

The Topo of the Route. 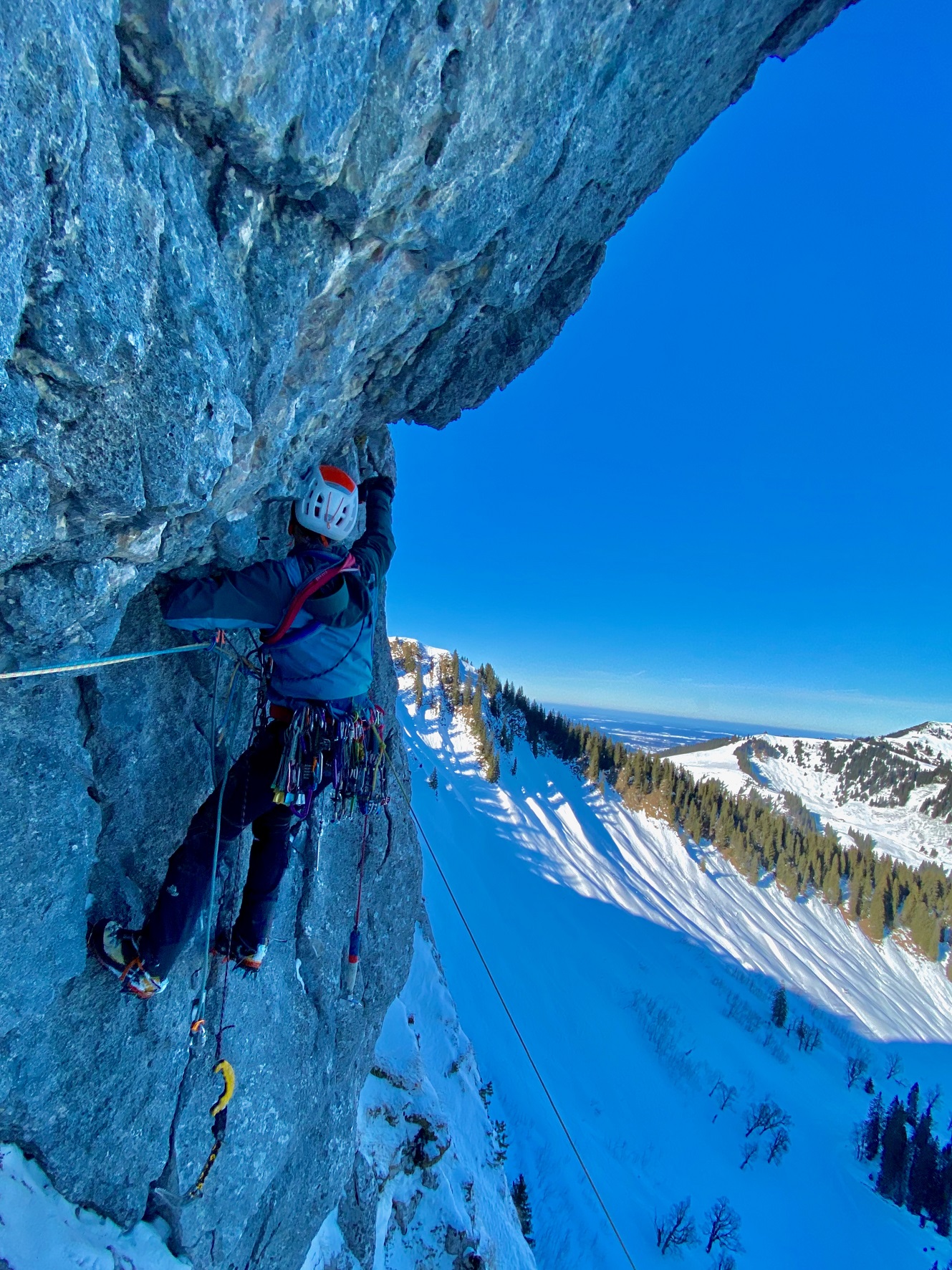 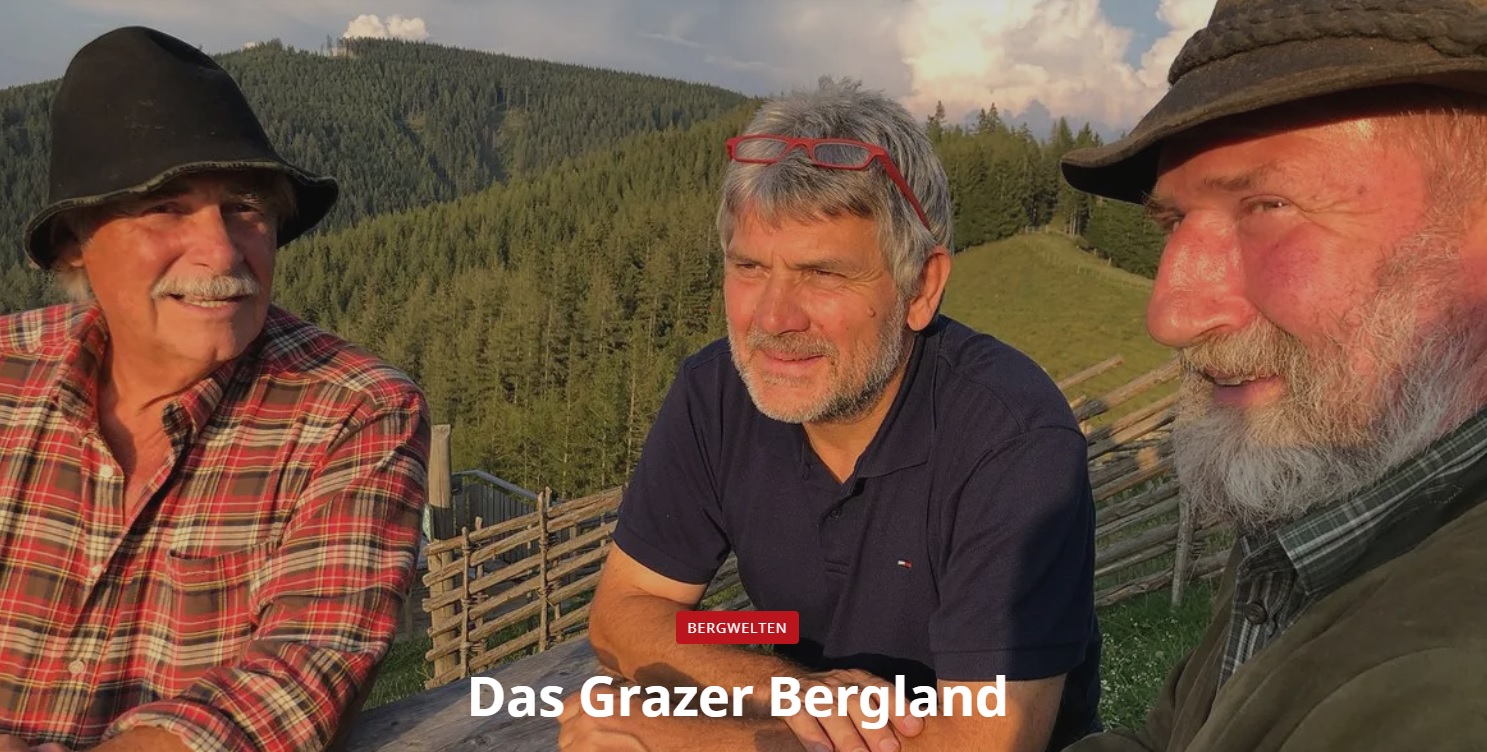