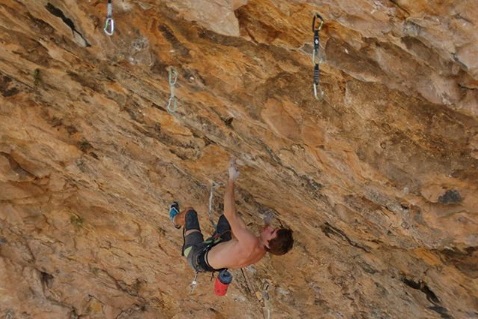 After the Swiss Cédric Lachat, Seb Bouin manages an ascent of Klemen Becan’s “Joe Mama” 9a+ in the Spanish climbing crag of ​​Oliana. It was the 8th ascent of the route which, with Anak Verhoeven, can also be a female ascent. Like Cédric, also Seb slightly downgraded the “Joe Mama” route to 9a/+. Two days later he manages “Catxasa” 9a/+ after moving to Santa Lynia. “Two days after sending Joe Mama in Oliana, I am able to send Catxasa in Santa Lynia. It’s a different style, much more overhanging. I like this style. I used kneepads for the link, and I think the route is a bit easier with kneepads. It’s maybe time to check seriously something harder. Let see how it’s going.” Photo: Victor Rastas