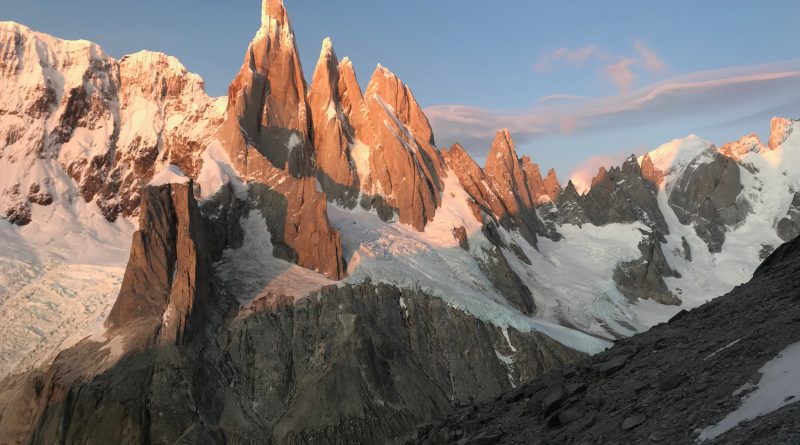 Roger Schäli was in Patagonia for the legendary time, dies with Jonas Schild. The highlights the Linkup of Aguja de I`S, Aguja Saint Exupery and Aguja Rafael and the rear repeated 900m long and demanding Fonrouge – Rosasco / South Face – Poincenot in 24h back to town.

Amazingly, I travelled to El Chalten for the eighth time now, together with Jonas Schild at the end of January. Thanks to the four peaks that Jonas and I climbed this season, I was able to stand on all eight Fitz Roy and the three Torre peaks over all my trips to Patagonia (Cerro Torre even twice), which I’m very pleased about. This place, El Chalten, keeps drawing me into its wind-swept magic. Set at the end of the world, it is surrounded by the majestic granite summits of Fitz Roy and Cerro Torre, who account for two of the most beautiful mountains on earth to me. Jonas and myself had set clear goals for our time in the south of Argentina. Still, we were aware of the complicated weather conditions of this region. Up until our arrival in late January, the weather was pretty bad, making any major expeditions impossible to that point. Right after we arrived in El Chalten however, a short weather window was gifted to us. We were pretty sure that the conditions were not going to be optimal, after the previous amount of downpouring rain and snow, but after re-routing and adapting our plan according to the local conditions, we were able to climb the Austriaca and the Aguja de l`S. So, one day after our arrival, we already managed to reach the ﬁrst summit. Admittedly, one of the smaller Patagonian summits but, considering the conditions, still one not to be underestimated. After returning to the valley, we had the chance to accommodate and ﬂow into the Chalten-lifestyle: meeting friends, having coffee, assados and good conversation, bouldering and most importantly, regularly checking the weather forecast. Luckily, with four to ﬁve days of good weather ahead, it did not take long before we were on our way again. We spent the next three days with great climbing, nice bivouacs and some pretty wild rappelling and were able to reach the summits of Aguja de l`S, Aguja Saint-Exupéry and Aguja Rafael. Still, because of the cold, the large amounts of snow and the degree of exposure, we decided not to go forth with climbing the gigantic southface of Poincenot. After ﬁve days in the mountains, we were very happy about a hot shower, some good food and bad weather, which gave us the chance to rest and recuperate in Chalten. Being blessed with such exceptional weather conditions made us doubt whether we would get a good chance again. However, we were very lucky, and anticyclonic weather was forecast once more. We saw, that the western side of the Fitz Roy range dried up hugely compared to last time. Hence, we decided to continue on with our originally planned traverse. Upon the ﬁrst light of day on the following morning, we entered the 900m long Fonrouge Rosasco in the south face of Poincenot. After two lengths of simultaneous climbing in the upper part, we took the classic but only moderately difﬁcult Whillans-Cochrane route, which led us up to the summit.

The feeling of standing on top of this pointy needle and enjoying the sunset, while looking out to the inland ice, the Torre range, Fitz Roy and El Chalten is hard to put into words. We quickly rappelled down the Whillans ramp that night, but our descent was quite challenging. We kept sinking in to the wet snow up to our hips. Finally, after the last 10 km trek to El Chalten, we dug into our highly appreciated Schnitzel at 7am, pretty much exactly 24 hours after we had set out into the climb. All in all, we had a really great time in El Chalten. The conditions did not allow for us to realise what we had originally intended to, but we made the best of it, and we feel very well prepared for our return next year. I have realised that reaching the “smaller” peaks such as Aguja Saint-Exupéry or Aguja Rafael, which Jonas and me climbed this season, proved to be more challenging than climbing the well-known Patagonian summits via the classic routes to a certain extent. After successfully accomplishing these classics, it gets increasingly harder to envision innovative and complex dreams in Patagonia. To be honest, I underestimated the smaller summits. Even with less “Patagonia-experience”, Jonas largely contributed to our success with his disciplined and respectful tour planning. Big compliments go out to this young alpinist and friend. Even apart from climbing and mountaineering, our expedition to Patagonia was truly wonderful. We were able to make new friends, as well as meeting old ones. Special thanks go out to Rolando Garibotti, who supported us with useful information and the weather forecast. It was really enriching to talk to him and many others about all manner of things, which to me, is equally precious as.”

FACEBOOK: @roger.schaeli @jonasschildalpinist our content is not made for any commercial usage but of course we would love to see our story in printmedia so ask for more….. photos copyright by Roger Schäli Jonas Schild