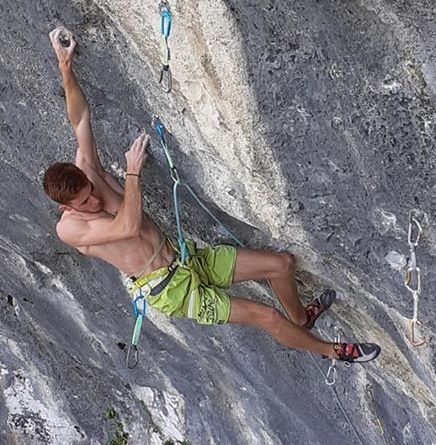 The 18-year-old Frenchman Loïc Zehani reports his second 9a first ascent this year. This route in his home region of Orgon he named „À contre courant“ and was also bolted, like his first ascent „Teahupoo„, by his father Christophe Zehani. Loïc filled all the chipped holds and climb the much more difficult route. It was his 18th route in grade 9a and harder. Last year he climb his first 9b route with “Obsession”.

„It is an old 8b bolted by my father over 15 years ago, which had chipped holds. I noticed that it would be possible to pass without these artificial holds by shifting the line a little. With the agreement of my father, I filled all the chipped holds and that gave a very pretty 9a (or 9a/a +), almost completely natural but two at the very start. First, there is a really hard section of ten movements approx 8A+ on small holds in a steep overhang (with a hard-clipping in the middle!) Then directly after a dozen hard movements. It is the most beautiful and natural hard route in this sector. It took me 3 or 4 sessions to do the movements and 2 more to do the route.“