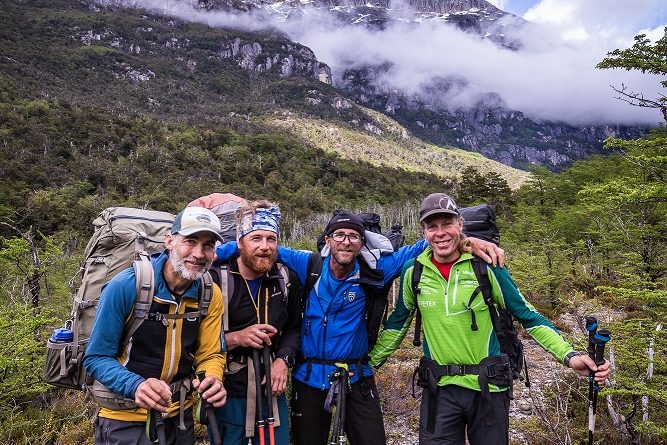 Robert Jasper, extreme climber and mountaineer, set off to the very little explored northern Patagonian inland ice in October with his mountain guide cohorts Jörn Heller and Andi Thomann as well as photographer Klaus Fengler. Their motto was “exploring“ the last white spots on our globe.

They wanted to explore one of the worldwide largest frozen surfaces and climb a mountain during their expedition. They took a boat from Puerto Bertrand in Chile across the Lago Plomo in the Val Soler Valley, which stretches into the inland ice for many kilometers. The approach took four days through the wilderness and cold rain forest until they set up base camp.

The fact that unknown mountain ranges with huge glacial areas make surveillance and exploration necessary took their toll and forced the climbers to change their plans and routes several times!

The global melting of glaciers is proceeding the fastest here and the maps had many deficiencies. “I very much depend on good conditions of the ice as extreme climber and mountain guide and globally seen the melting ice is, of course, a much larger problem, not just for us mountaineers”, says Robert Jasper.

Huge seraces and crevices opened up and made moving forward difficult! Storms with very bad weather, heavy rain and snowfall forced the mountaineers to hold out in base camp again and again.

After four weeks in the wilderness and several energy consuming attempts on the mountain their food supplies were running low and had to be rationed so the team could use the last chance they had. A good weather window was forecast for the last day of the expedition. Robert Jasper and his team put all their eggs in one basket to climb Cerro Largo, a mighty, heavily iced-up mountain looming over the glaciers of the inland ice, with light gear in single-push style. They reached the summit beginning their ascent with skis, then climbing through ice that got steeper and steeper, and finally through vertical wind-pressed snow mushrooms. It was the second ascent of the mountain in total and the first non-stop summit push! The coordinates were saved via GPS! The registered facts were roughly 50 km and over 5000 m altitude gain in 18 hours as the team reached base camp again shortly after midnight in the glow of their headlamps!