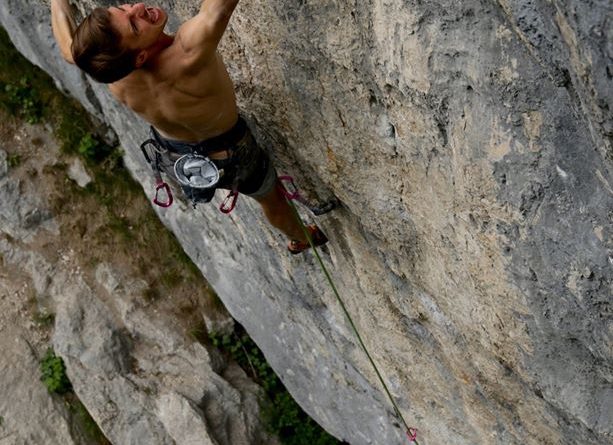 After Adam Ondra, the local Roland Hemetzberger managed the ‚Qui‘ (9a+) on Geisterschmiedwand near Kufstein in Tyrol (Austrai). The route first ascented by Stefan Fürst in 1996! and has not been repeated since. Stefan originally graded with 8c +. A break out of the hold may have made the route more difficult. Adam, like Roland, would even graded with 9a + rather than 9a. ‚Qui‘ is the direct link up to „Wagnis Orange“ by Gehard Hörhager. The route „Wagnis Orange“ first ascented by Gerhard in 1988 and was probably the second 8c route in the world after „Wallstreet“ in Frankenjura (Germany).

„I still find it hard to believe but yesterday was the day. – I was at anchor of Qui 9a+. More than 23 years without any repetition until Adam Ondra climbed his „nightmare route“ last September.
Motivated from his video I was psyched to invest some energy in this route. Qui was original climbed from Stefan Fürst 1996, which was at that time one of the hardest routes in the world! The lower part is a hard 8c/+ which ends in a poor rest than you have the pleasure to link a five move boulder problem around Fb 8a to the top of the route. It was physical and mentally one of the biggest challenges I`ve ever had. I climbed at least 45 times the 8c part end failed usually on the boulder, until yesterday! Huge thanks to all my friends and beloved one for all the support and energy.“