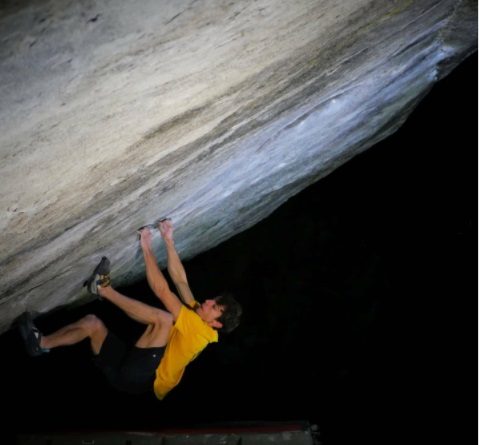 Now the Belgian Simon Lorenzi could secure the 5th ascent „Off the wagon low„.  (8C+) in Valle Bavona, Switzerland. Giuliano struggled for six years on the boulder until he managed the ascent. The boulder is considered the most difficult boulder in Switzerland.

„In „Dosage 3“ @dave_graham_ and @chris_sharma showed us this incredible boulder and a part of the future of the sport but we had to wait few more years for @nalle_hukkataival and the first ascent of the stand.
In 2018 i got really obsessed when @shawnraboutou did the first ascent of the low start. So In this end of 2021 i decided that it would be the last year of obsession (or not) for this king line.

I started to try the low start as soon as i did the big move from the stand once. After spending few sessions in the boulder the last two months and falling at the same move every time i finally found the key 2 weeks ago during a rainy night. It was my last day and the top out was wet so i decided to try something to improve THE crux move. Surprisingly i found a small trick and did the move around 5 times out of 10 tries. From there i felt that the next session could be the one.

So this week i went to Sonlerto for one session. The only climbable day was yesterday because of the rain so i did the road ​from belgium (9hrs) thuesday hoping that the day after would be enough. Wednesday i started to try at 3pm but after 3 hours and 15th tries falling at the same f****** move i was going crazy but also too tired. My last option was to have a big rest so i went to see @dave_graham_ and @clem_lechap trying „Road Kill“ for 1h. I came back to the Wagon to give my last few attempts. My first attempt was’nt very good so i decided to go quickly afterwards to keep the feeling of the crux.
It worked better than expected and few screams later i was standing on the top of the boulder!“

Once again a dream come true!
Thanks @orianetollebeek for the support during the process“

In February Simon manages one of the „very big“ and „last problems“ in Fontainebleau with „Soudain Seul“, the sit start version of „The Big Island“. It was at the same time his first 8C+, if it is not perhaps a 9A ;-). So far, only Nico Pelorson has been able to repeat the boulder.