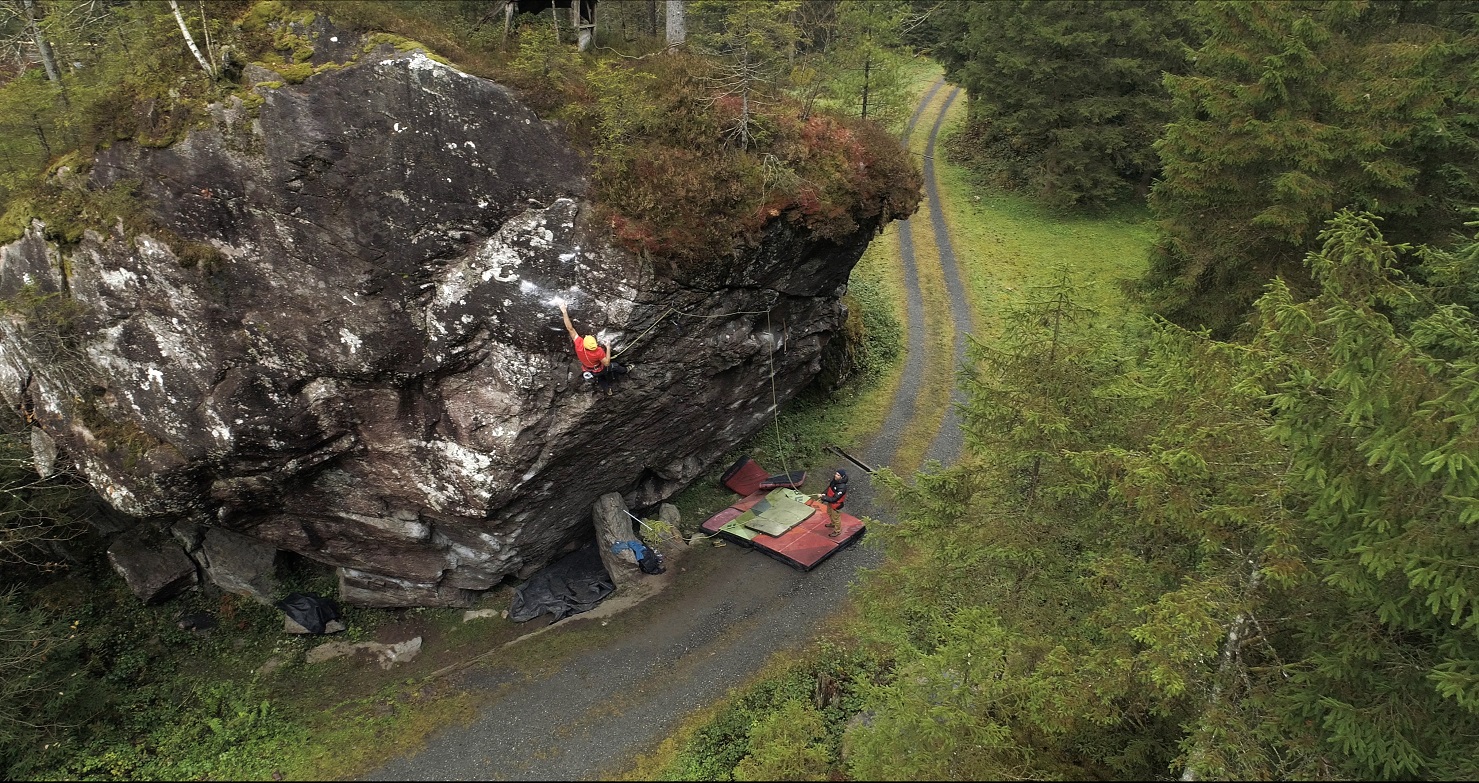 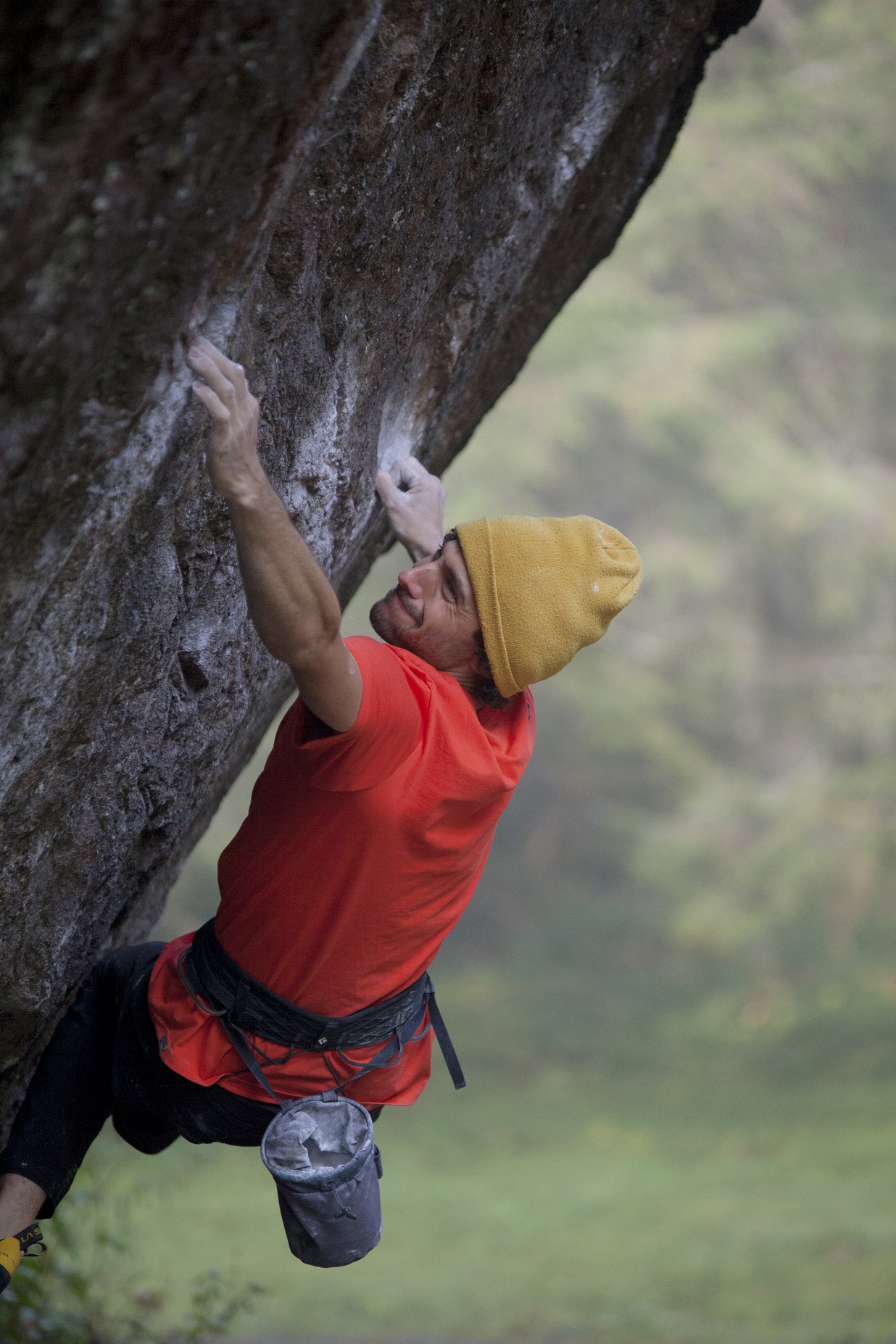 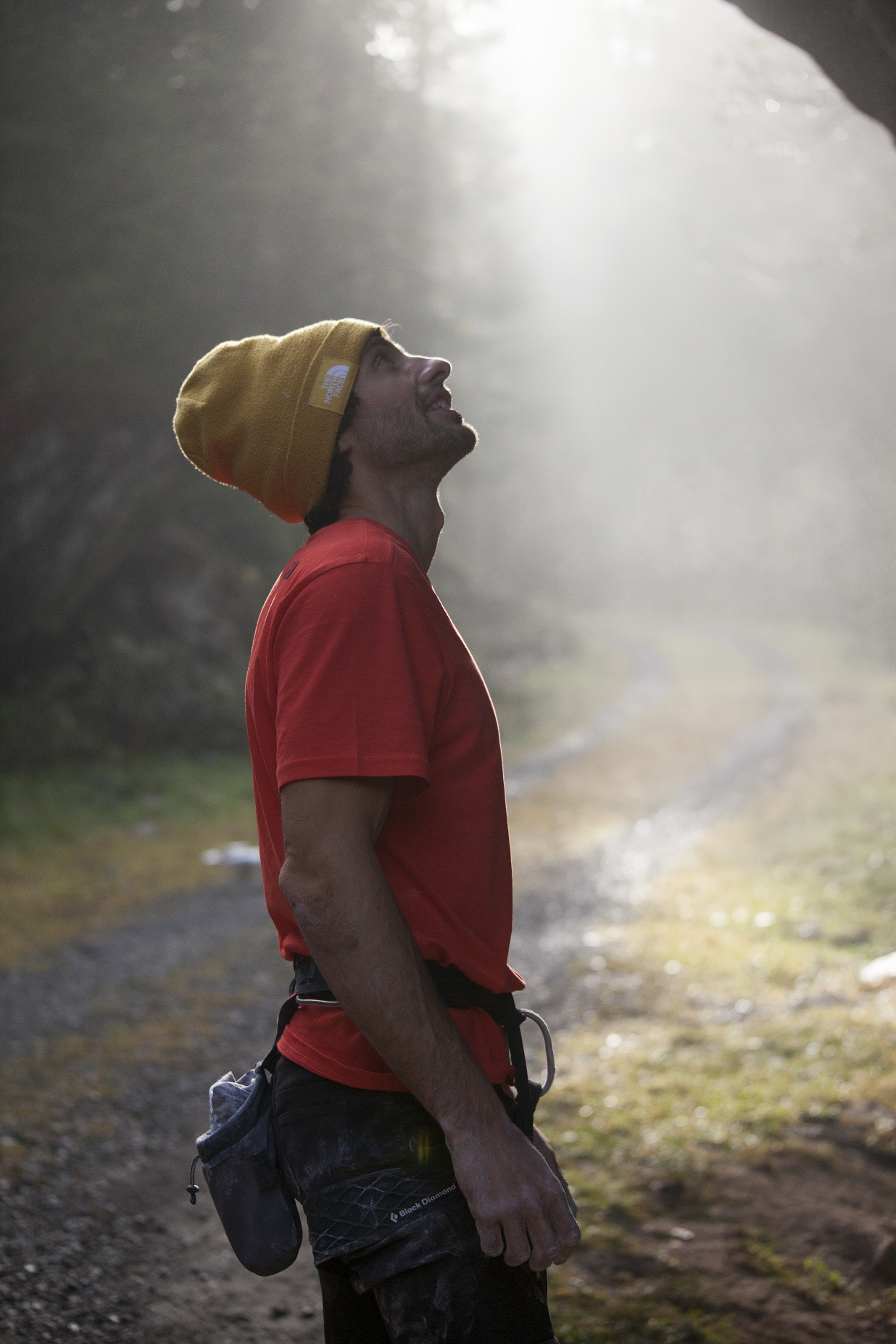 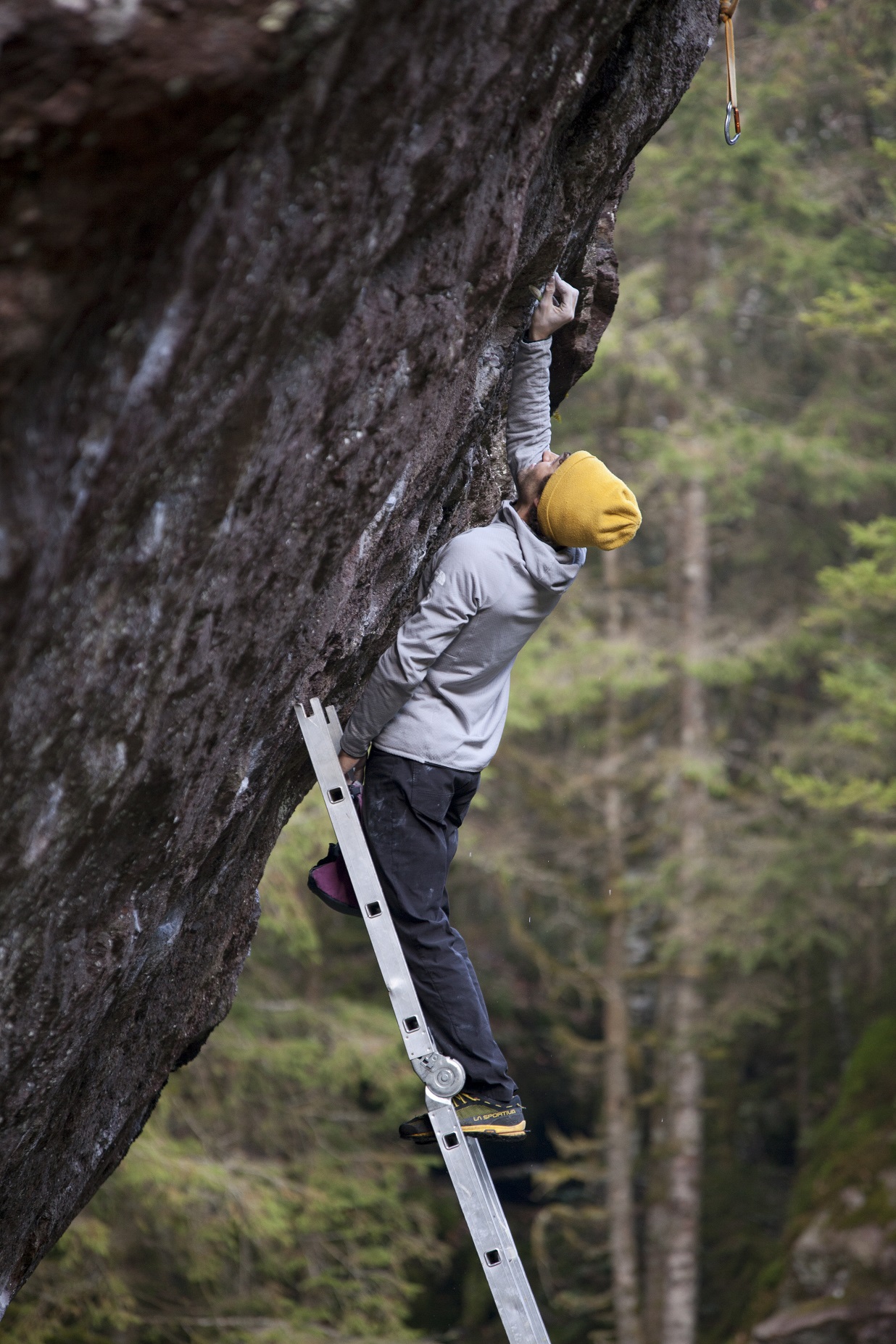 Jacopo dazu: „After our expedition to Pakistan I felt the need to focus again just on single pitches and boulders, at least
for some months. No running, no long days in the mountains: just rock and (for me) hard moves!

Lately I’ve been particularly interested in exploring the different aspects of trad climbing. Within this same
discipline there is a wide variety of styles, often completely opposite, which makes it so interesting to me.

I remember reading the article about Bernd’s first ascent of the “Into the sun“ and being very curious
about it. It seemed to be something different from all the other trad climbs I’d tried or seen, which
motivated me even more to go and have a look at it. I like, and I think it’s important, to check out other’s
first ascents; it’s inspiring and refreshing to see other’s visions, maybe get out of our comfort zone and
open our mind to different possibilities. Everyone sees something different while standing in front of a
piece of rock and finds different solutions/approaches to climb it. This variety of visions and this exchange
is what makes our sport and ourselves growing!

This fall I finally decided to go Murtgal and check Bernd’s route out. It was my first time there and I
honestly fell in love with that quiet and beautiful valley! The sharp rock isn’t the best you would wish for,
but the nature and the quietness make that place so special.

“Into the sun” is located on a big boulder, which hosts several problems, and it traverses the entire block
from the right to the left. The route is basically a top out of Bernd’s existing highball called “V.I.P. (Very
Important Papagei)”, which ends on a jug next to a bolted belay. This is by far the hardest part of the
entire climb; after skipping the bolts, you traverse left on an obvious big crack and top out on the other
side of the boulder with a slightly harder mantle. This very last section has been climbed as a highball
stating from a different problem. The climbing is easy, but the rock is often wet and doesn’t seem always
solid, that’s why I think it makes even more sense to climb it on gear instead of doing it as a highball. As a
trad climber, that’s exactly how I would do it.

After the first session I had a good feeling, as I could climb the long boulder problem in two sections, but
the last few moves (of the boulder problem) turned out to be a real struggle for me and I had to invest
several more sessions and a lot of energies to eventually climb it.

The biggest struggle, apart from the hard climbing, were the conditions. Due to the fog, the starting
holds/footholds where mostly damp, so you had to try to climb the rest of the boulder with wet climbing
shoes/hands. The packed period of route setting didn’t help to take advantage of the sporadic good days

but gave me an extra motivation boost for making the best out of every session! After falling off the very
last move many times, he last day before the big snow storm (aka possible end of the season for ITS) I
managed to climb it first go with prime freezing conditions: it was such a good feeling! I honestly was
happy with the decision to climb the last section as trad climb, as my fingers got completely numb in the
crack and I couldn’t feel anything on the last mantle.

So now the big question, which everyone is asking me, is… What is “Into the sun”? Is it a (green point) trad
climb or an highball? How can we describe it? Honestly for me the biggest question is another one… Do
we need to give a name to everything and fit in into a box? I personally don’t think so!
For me „Into the sun“ is Bernd’s vision of how to climb a nice piece of rock. It was the way how he
challenged himself and got back to climbing after an injury, which according to the doctors wouldn’t allow
him to climb anymore. He managed to overcome this huge challenge and set a new one for the other
climbers. I take it on, found it really hard and I really enjoyed the process. That’s what I believe climbing
should be. Someone else would have bolted, someone else would have chipped it, someone else would
have free solo it and probably the most part would have never imagined to climb it…

I think he did it in the best style and I personally would have done it the same way if this would have been
my FA. The only thing I would have done different is the start, for me it would have make more sense to
stat from the stand start of the boulder, instead of adding the first few hard moves… but once again,
that’s exactly the cool thing about climbing, everyone sees something different. Thanks again for the
experience Bernd and props for the FA.

…and of course big thanks to Babsi, Mauro, Andrea and Michi for the support. It wouldn’t have been
possible without you!“ 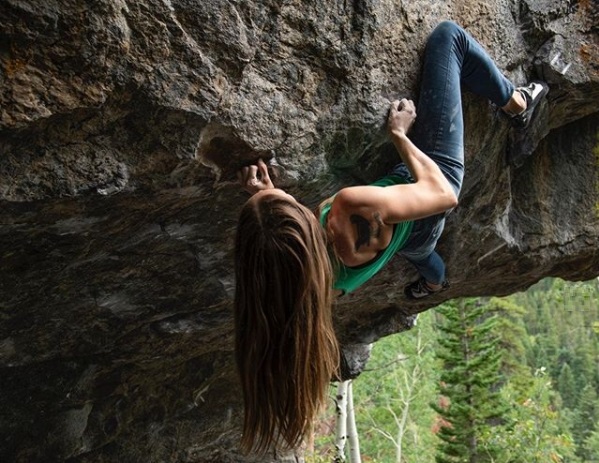 Isabelle Faus meldet "The Emasculator" (8B+) 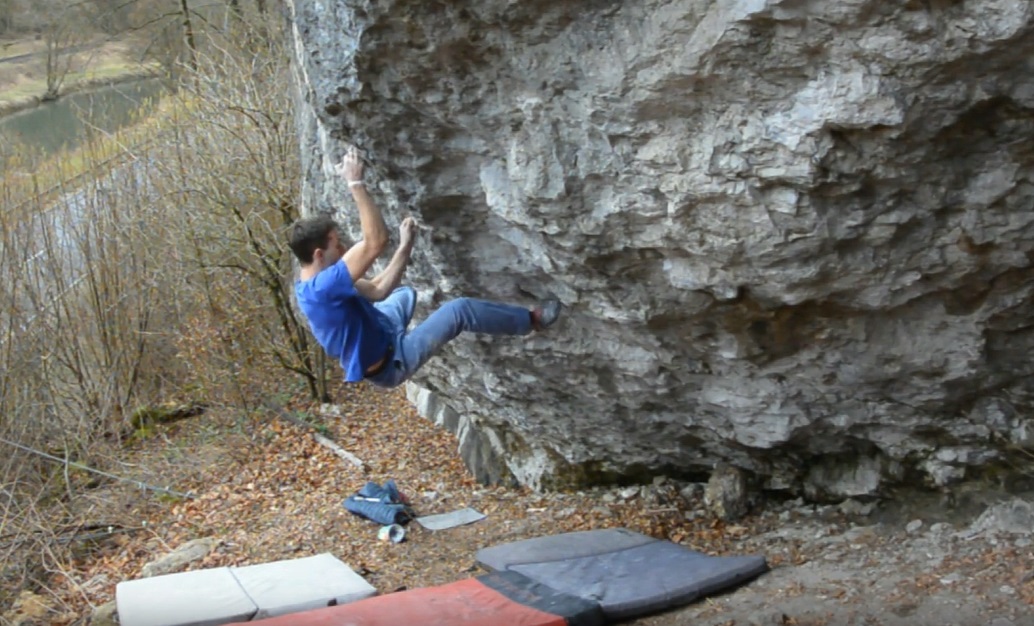 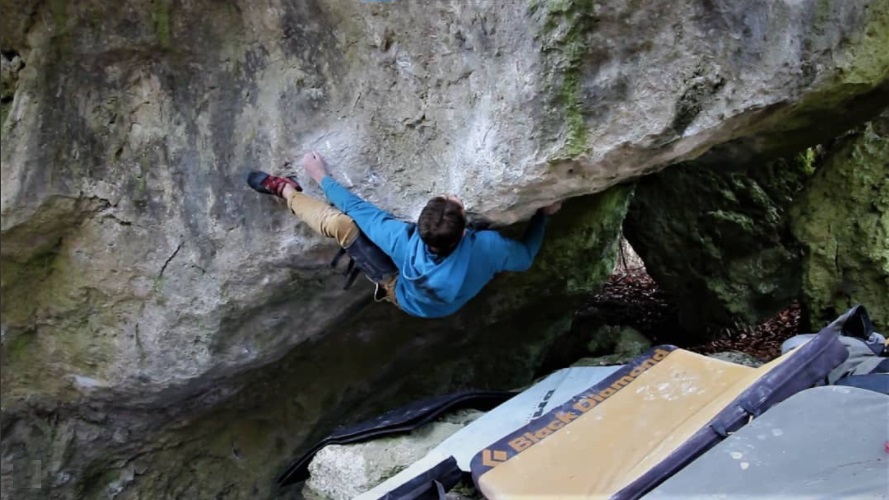